Aha, perhaps you’d thought the Kathmandu to Istanbul expedition had also forgotten to fill in the final gaps in their journey, not so!  Consider this a Christmas bonus.

We last left you on arrival into Tbilisi, Georgia’s capital.  The city has apparently been destroyed and rebuilt 29 times yet the layout of the old town remains largely intact and was a pleasure to wander the narrow streets and even sometimes explore the crooked houses.  The more modern side of the city boasts attractive avenues, grand squares with street cafes creating a Parisian feel and some tasteful modern architecture including the bow-shaped bridge across the Kura River, named The Bridge of Peace and connecting Old Tbilisi with the new district. 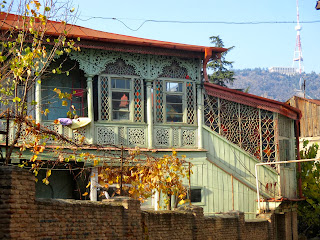 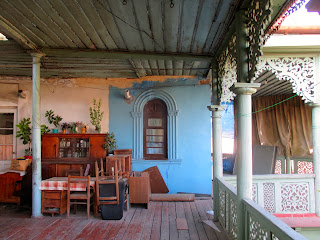 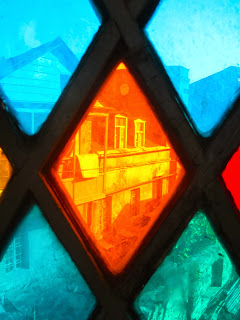 Lisa made her way straight up to the TV antenna park for what has become an obligatory, if there is one, spin on the ferris wheel overlooking the city.  Everyone joined Zaza for an informative and orientating walking tour of the city the next morning, leaving the rest of our time there free to do as we pleased.  Some enjoyed an evening of local entertainment with dinner and dancing.  Being bought a jug of wine by the next-door table they bought them one back, which then started the wine war.  Both buying each other jugs until they could drink no more, then there was nothing more to be done than to get on stage and join in the dancing. 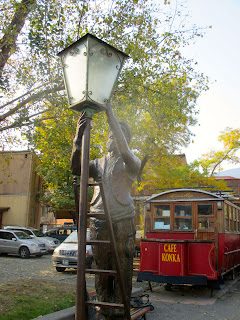 Leaving Tbilisi the first stop was at Ananuri stone fortress, a site well known for being on the cover of the Lonely Planet for Georgia, Armenia & Azerbaijan. 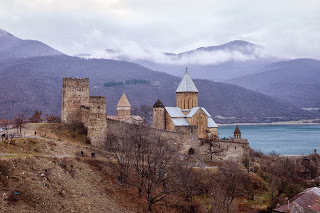 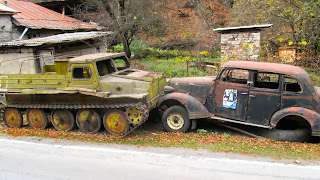 It was after here that events took an unexpected and unfortunate turn.  On stopping for a group photo at the stunning mosaic sculpture near the ski resort of Gudauri, we all took our places which included many on the roof of the truck, somewhere the crew are very familiar with being and are always careful.  This time for some unknown reason Hels lost her balance and took a tumble off the side.  If you are unlucky enough to injure yourself on the truck make sure you have a quick thinking doctor, three nurses, a great local guide and fellow crew member on board.  Hels was in an ambulance within 20 minutes and eventually transferred to a brand new private hospital in Tbilisi with the utmost care and modern diagnostic equipment.    If you’re squeamish skip the next few lines… In some ways she was fortunate to escape with an undisplaced fracture of the skull, burst eardrum, small bleed on the brain and seven fractures to the transverse processes of the vertebrae, meaning her spinal cord was not at risk, they do say 7 is a lucky number.  Once again the Georgians outdid themselves with their generosity and kindness, refusing money to pay for Rogs, Tan & Vicky’s accommodation and food, who took it in turns to stay with Hels, and offering any help they could.  We were then reminded of the importance of having good travel insurance after they were contacted and swung into action, arranging nothing less than a private Learjet ambulance complete with doctor and paramedic from Germany to fly Hels with Rogs all the way from Tbilisi to London via Nurenberg.

To cut a longer story short and set your minds at ease, Hels is now at home in England after a three-week hospital stay and is recuperating slowly but surely.  Everything will heal on its own in time but for now she’s enjoying the enforced rest and cups of tea in bed!  She is vowing to return to Georgia in the not too distant future to thank quite a few people in person.

So here the blog takes a new turn as we weren’t actually on the trip thereafter so the final few paragraphs will be gleaned from recent conversations, rumours, plagiarized from the group’s own blogs and looking at photographs!

Rogs soldiered on with the truck and group up to Kazbegi for the night, now officially known as Stepantsminda, finding the accommodation with a bit of sign language.  Limited on time, the group made their way up to the pretty Tsminda Sameba church in Lada 4x4s.  Worth it for the stunning views of the high Caucasus.  The church sensibly had a roaring gas fire going to keep the local priest warm.

Due to the unforeseen events the group then returned to Tbilisi for a night to await Pete and Kirsten, the Odyssey owners themselves, who had coincidentally just arrived in Istanbul at the end of their Beijing to Istanbul expedition and able to fly back to Tbilisi and take over the final 10 days of the trip meaning Rogs could accompany Hels back to the UK, or was it that he just wanted a ride in the Learjet?

Goodbyes are never easy, so handing over the reigns and saying farewell earlier than expected was of course emotional.  Whilst Rogs and Hels (chatting away happily but rather incoherently on morphine) took to the skies, Pete & Kirsten continued with the group on to a homestay in Kutaisi.  That evening Pete decided the best way to deal with the somber mood was Georgian wine; jugs of it, whilst insisting it wouldn’t give you a hangover due to the lack of preservatives.  There are some who would have contested this claim the following day, which was thankfully just a short hop down to the pretty town of Batumi, a black sea coastal resort popular with the Russians.  Stopping off at the Bagrati cathedral en route. The cathedral had been reduced to rubble during WWII and subsequent Russian occupation and was now, post restoration, a mix of old and new. 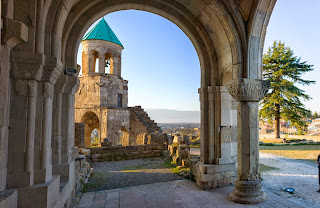 Batumi entertainment on offer was a British pub showing Georgia beat Samoa at rugby or even the opportunity to have fish & chips by the sea.
An even shorter drive the next day to the border, our final crossing and country of the trip, Turkey.  The first stop was a visit to the Greek Orthodox monastery Sumela.  A popular tourist attraction due to its structure, an incredible feat of engineering, built on the ledge of a steep cliff.  Most people hiked up the path, Linc decided to run, but Dave & Dr. Bruce took a taxi, due to the weight of their camera gear of course. 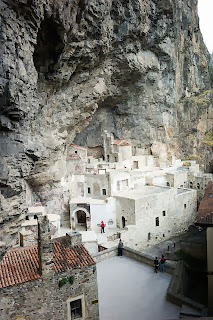 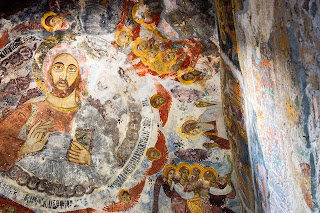 Leaving the pretty mountain town of Macka it was time for more goodbyes as Bree & Linc left to return to Australia for a family wedding.  The group gradually shrinking as Lisa had taken herself off to Armenia for a few days but would rejoin for the end of trip celebrations in Istanbul and Adrian had also unexpectedly been called away early on business.  The weather then decided to join in and having had virtually no rain all trip it chose the final week to make an appearance.  Rather than endure a final bushcamp in plummeting temperatures and pouring rain Pete & Kirsten took a popular decision to stay in a rather nice hotel in Sivas instead.  Breaking up the journey, which the next day took them to Goreme in the heart of Cappadocia.

The group enjoyed a full day tour of the area including the underground city of Kaymakli, carved out of volcanic rock and some 4,000 years old, then on to a pottery where Mark had a go himself and proved why it’s best to leave some things to the professionals.

The following morning, such an early start the stars were still out, the weather played ball and a misty atmospheric morning cleared beautifully for a breathtaking balloon ride over the stunning landscape, narrowly skimming the fairy chimneys.  Toasting the flight with bubbly on landing, all before breakfast, it was the trip of a lifetime and a welcome highlight as the end of the trip drew rapidly nigh. 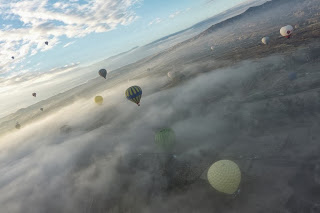 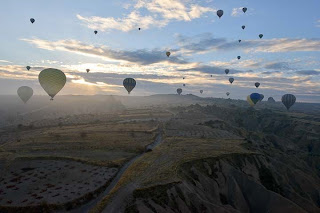 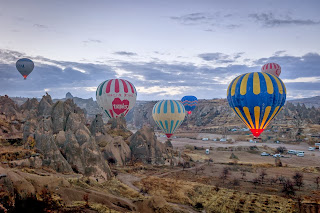 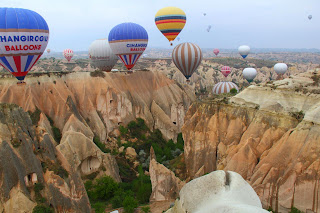 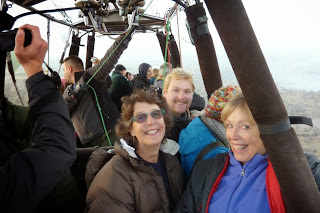 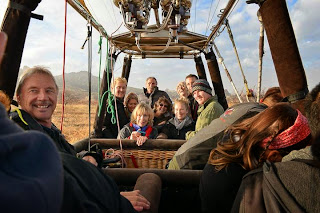 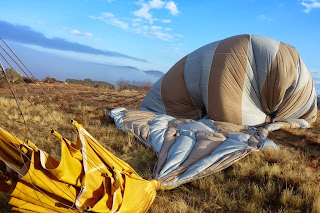 A second day in Goreme allowed the group time to explore more of the sites and scenery, go for a Turkish bath or buzz around on quad bikes.  Delightfully quiet being just out of season, however there was a meeting with another Dragoman overland group the first evening where we proved to be the much hardier of the groups.

The final push and possibly the longest drive of the whole trip from Goreme to Istanbul went without a hitch, just slow progress from as far as 90km outside the heavily populated capital.  Istanbul is a stunning city where East really does meet West and a fitting place to end our journey.  With endless mosques to visit and sites to see, the grand bazaar can help relieve you of your last pennies and the tea houses serving gooey baklava and sweets ensure belts return to their original notches. 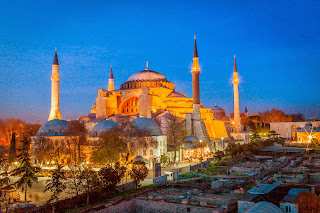 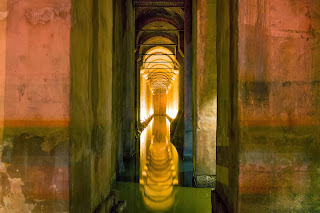 We cannot sign off without saying sincere thanks to all our contributing photographers.  Dr. Bruce & Dave Cairns for their spectacular pictures as well as Vicky, Tan and Lisa who somewhat bravely let us scan through their memory cards and take whatever we liked!  The blog wouldn’t have been anywhere near what it was had it not been for all these offerings.


It has been an absolute pleasure to run this expedition for Odyssey Overland and we are incredibly grateful to Pete & Kirsten for stepping in without hesitation and taking the trip into Istanbul.  We feel honoured to have shared this 3 month journey with such a great group of travellers, who thankfully turned out to be a lot less scary than they looked at first glance in their passport photos.  The shared experiences, adventures and memories have certainly cemented friendships for life.

Posted by Odyssey Overland at 23:19 2 comments:

Where are we now?